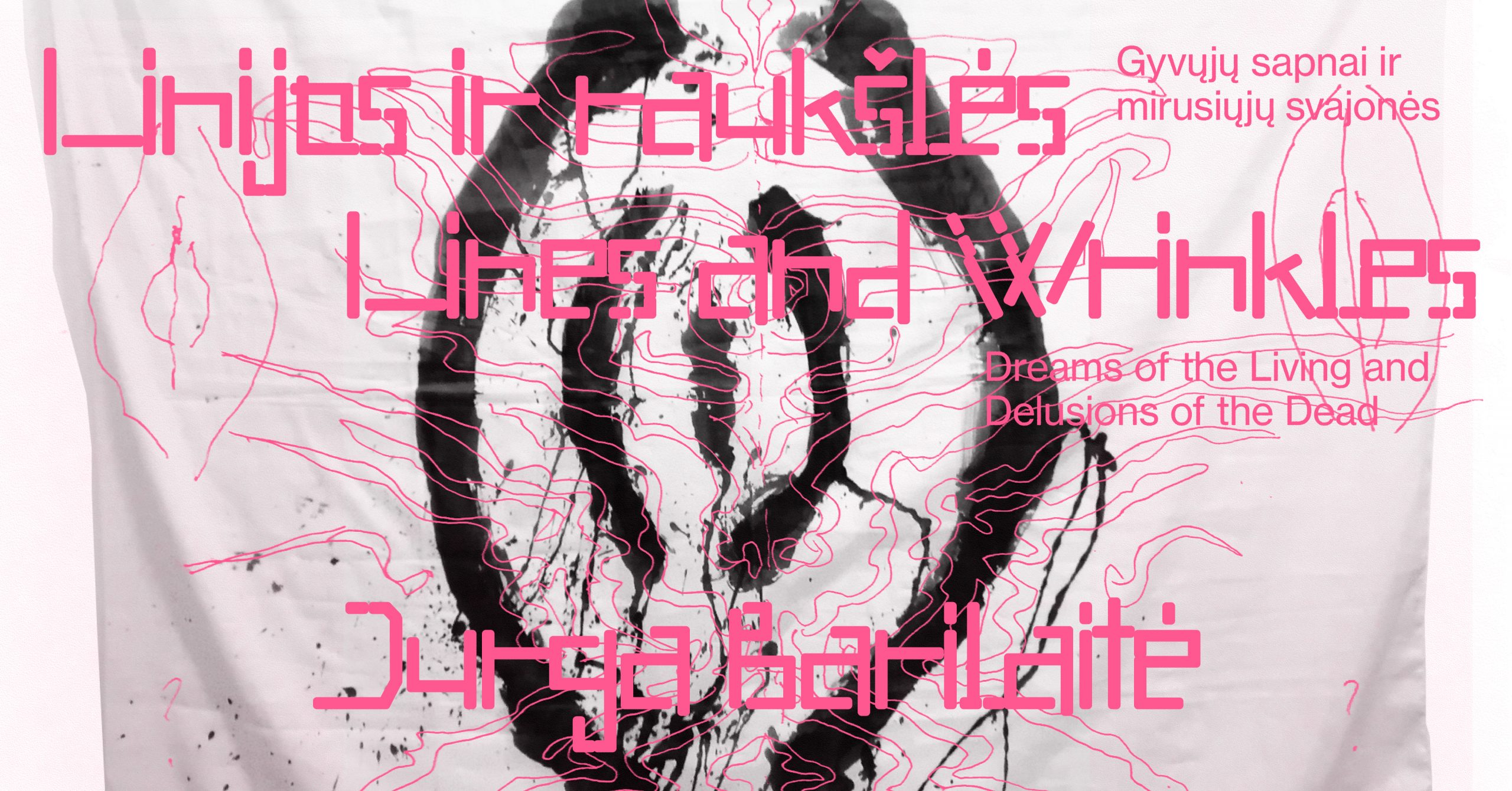 From 23 December 2020 “Atletika” gallery and artist Jurga Barilaitė invite to wander the routes of the exhibition “Lines and Wrinkles” and to follow its links in a digital publication. This publication, created by Barilaitė together with designer Gaile Pranckūnaitė, is presented as a “pdf” document – an introduction to a live presentation of an exhibition.

“Lines and Wrinkles” is the second part of an ongoing project “Dreams of the Living and Delusions of the Dead” developed by Barilaitė.Theearlier research material was presented as an exhibition “Bones and Sediments” at the Artifex Gallery in 2019, while the final part of the research, titled “Weapons and Hideouts”, is to be presented in around one year’s time.

“Lines and wrinkles” is a selection of sounds and images of transformations, processes, mergers, splits. The video and audio installation is designed to search for sound and letter as a symbol that manifests itself in the human body and face, as well as to discover the mystery and to forget it. “Lines and wrinkles” is also a selection of photo and video collages, an archive of stories and live (non-)ritual actions and performances. The artist merges magical geometry, psycho-geographic map drawings in ancient and new forms, and so-called “blue cord” drawings. These drawings are made with an old tool for drawing straight lines, visualizing the intertwining experiments of physics and life.

The carcass of the story:

Support and protection
Irrational action – waving one‘s hands and feet
The secret of the world and its oblivion
Inscribed in dark lines and wrinkles
Soot, graphite and diamonds
Sediment and eternal ubiquitous coal
The excuse of being cold and your back being sore
A dzirkstelīte* traveling
In cosmic rays and through quantum tunnels
The singing king enters
The falcet vibrates the edges of the vocal folds
All our secrets begin with the alphabet
Sound and letter
Our weapons and hiding places
(Jurga Barilaitė 2019)

“The artist puts out his eyes
Having drawn the smile of a dead little monkey”
(From poem X by Auris Radzevičius. I have seen the draft where the words
“Vibrating roar” were blotted out.)
* Sparkle (Latvian)

Jurga Barilaitė (b. 1972 in Vilnius) studied painting at the Vilnius Academy of Arts between 1990–1996, since 1996 she has been actively participating in contemporary art field.Barilaitė creates videos, performances and installations using a wide range of means of expression.She often explores the topic of a woman’s identity and her role in society, using her body in her works.Barilaitė’s works have been acquired by the Lithuanian National Gallery, Mo Museum and art collectors in Lithuania, Germany, Sweden, Austria, France, Latvia and elsewhere.