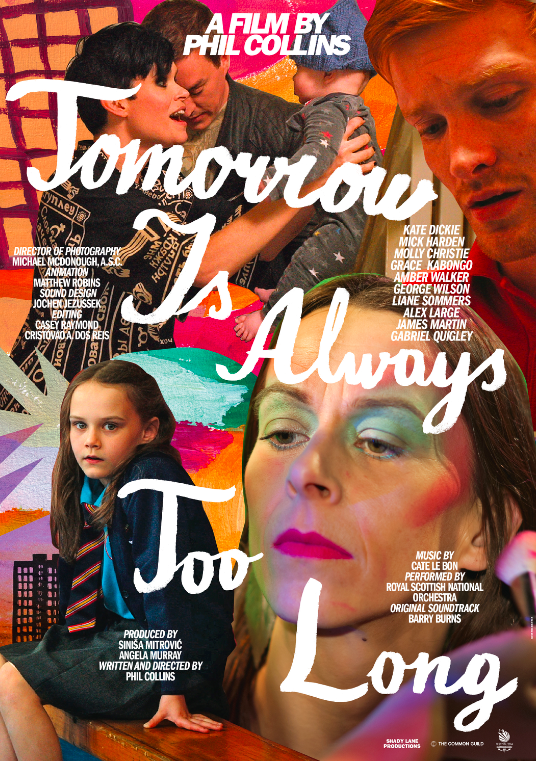 From 24 December 2020 to 6 January 2021 Atletika gallery and curator Monika Lipšic are inviting everyone to a virtual screening of a film Tomorrow Is Always Too Long by Phil Collins to be shown in the Room of Perspectives.

Room of Perspectives is a series of video screenings featuring artists’ films and video works on different views of the city from different perspectives.Cities as characters often become key players in multilayered cultural histories.Originally designed as a physical room – a video screening room at the Atletika gallery (together with architect Vladas Suncovas), this space referred to illusory paintings on the walls, made by painting the images seen behind those walls.With the loss of a physical spatial context and boundaries that can be viewed through, the format of screenings is moving to the social space and the discourse of community through practice.

Musical Tomorrow Is Always Too Long (2014), written and directed by Phil Collins, is a love letter toGlasgow Scotland’s largest city. Developed over the course of a year with various localcommunities, the film paints a portrait of daily life as seen through the scope of humanexperience, from birth and youth through education and the criminal justice system to oldage. The film is constructed from different parts: musical episodes featuring non-professional singers along with the Royal Scottish National Orchestra;public broadcasts featuring Glasgow residents from various spheres of society;a series of short animated fragments depicting the city at night.The improbable lovechild of musicals and documentary, late-night television and silhouette animation, Tomorrow Is Always Too Long defies classification to embark on an immersive and hypnotic trip into the heart of the city.

Phil Collins is a British-born filmmaker, visual artist, cultural organiser and educator based in Berlin and Wuppertal. His diverse practice is characterised by close engagements with place and communities, which over the years have included, amongst others, disco-dancing Palestinians, fans of The Smiths from three continents, Kosovan-Albanian refugees, the youth of Baghdad, anti-fascist skinheads in Malaysia, the homeless population of Cologne, and teachers of Marxism-Leninism from the former German Democratic Republic. Rather than static portraits, the works resulting from these collaborations articulate the nuances of relations embedded in the aesthetic regimes and economies that define everyday existence, from news and politics to entertainment and shopping.